You've been bitten by a zombie. Society as you once knew it has collapsed. The streets of your once beloved city are now swarming with corpses reanimated by the R1Z-N virus. Your only hope for survival is to crack open skulls and collect brain samples to be used as stims for temporary relief of the plague now spreading through your body. Along the way you'll need to search for supplies to keep your hunger at bay, locate safe houses to keep you safe during the night, craft makeshift explosives, and assemble whatever you can find for use as weapons. Welcome to your new life among the RIZN. 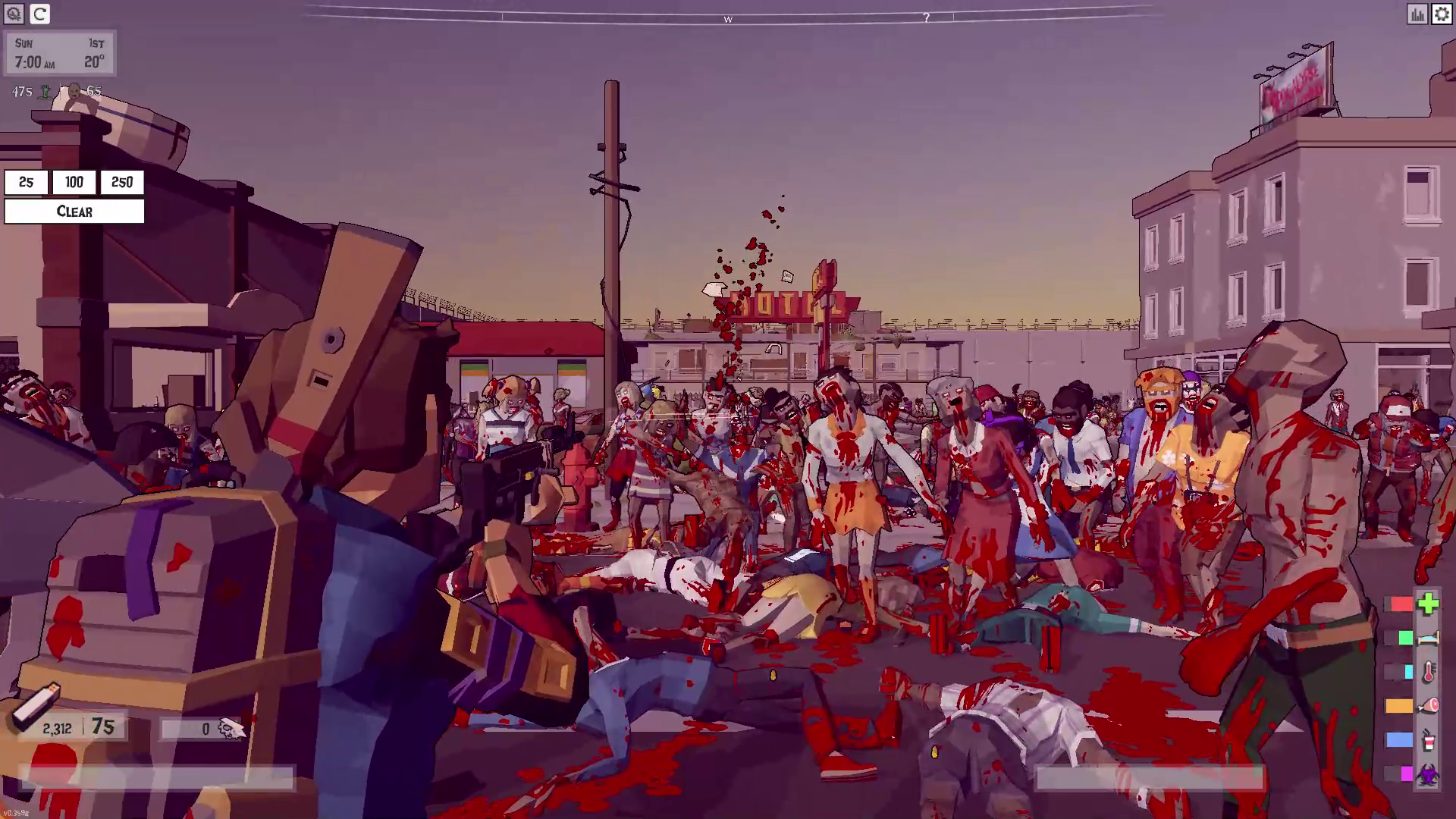 I work as a full-time freelance game developer and spend a lot of my free time experimenting with different mechanics which are often added to my portfolio. Back in March of 2020, I was working on a simple third-person controller and decided that it'd be more fun to test it if I had something to shoot at. On a whim, I opted to set up a single zombie mesh so that its head would explode and limbs would fall off when either was shot. I quickly began getting lost in the project, and as I added more and more updates to the prototype, the more fun I had when testing it. This led to wanting larger and larger groups of the undead, wanting new weapons like shotguns and RPGs, and the desire to see a dozen zombies blow up in slow-motion.

It has now been two and a half years since I first created the prototype, and I have spent a lot of my free time since then building a zombie shooter that has grown more complex and challenging every step of the way. I've increased max zombie counts from the initial ~100 to the well over one thousand ragdoll-ready animated corpses; I've built custom culling systems for ensuring the game is performant, keeping system requirements as low as possible; I've severed more limbs and blown up more skulls than I count, all in the hopes that in the end I'd have a game whose core initiative was to provide a lot of chaotic fun coupled with a ton of cartoon gore.

The world loses color as your infection spreads

RIZN offers four game modes, the main story mode following the story of one of two characters told through the in-game graphic novel. The other modes offer another 28 playable characters and were added as both a means of ensuring that each and every mechanic was in working order before focusing on story mode, and also to ensure that the project had as much replay value as possible. The procedurally generated quarantine zones that make up the city enables each of my playtest sessions to be as unique as possible, and the same should hold true for any run through survival mode.

I've written a custom shader that desaturates everything in the world based on how far your infection has spread, leaving only the dark reds of blood and detached limbs among the grayed-out world. The game also features a crafting system which can be used to create brain stims to keep the infection from turning you into the undead, powder kegs and other makeshift explosives that can be used to take out a group of rizn in a pinch, and the upcoming research stations will be leveraged in story mode as a means for the player to work towards a cure as they progress through the world. With over 40 different zombie variants, more than 130 weapon mods that can be used in countless combinations, and a full day/night cycle that enrages the undead after sunset, you'll need to make good use of every item you loot in the world if you want to be the sole survivor of this apocalypse.

I decided early on in development that I would prefer it if marketing were constantly playing catch-up with development rather than development catching up with marketing. With my recent 3-month dive into creating a zombie pooling system and adding some more unique (and explosive) zombies to the project, I'm in a great position to spend my free time during the next two months fixing any remaining bugs and prepping this project for an alpha release. The game will be limited to survival mode during this phase, and I'll be using the coming fall and winter to finish up things for both horde and circus modes. Next spring, everything done up to that point will be leveraged and combined into two unique stories told through a graphic novel. I've put a lot of time into ensuring that (almost) everything is working exactly as expected and as a result, the next several months are set to bear a lot of fruit.

RIZN is currently 25% off while pre-orders are available and my best estimate for the release of Alpha is mid-October. Ater 10 years of freelancing and helping clients bring their projects to release, I am beyond excited to finally be within reach of achieving that same goal myself and look forward to everyone's feedback once the game is made available.