Well, it's been about two and a half years now since I built the first prototype that would ultimately evolve into RIZN, and I've finally reached the exciting point in the development process where the bulk of the main mechanics and systems are in place and I'm free to polish things up and toy around with new ideas. With zombie attacks and the pooling system finished up last month, I've spent the last few weeks fixing a lot of annoying bugs and playing around with concepts that have existed on my Trello board for as long as I can remember. This article covers a few of the new features added since my last post.

I had ragdoll deaths in place for the player already, and while I was happy with the results when the player was killed due to an explosion, it wasn't working well for when they died due to other reasons. I've since gone through and added multiple generic death animations (some of which may be replaced in the future), but the one I'm most happy with is the sequence that plays when the player character succumbs to the R1Z-N virus.

The world's color desaturates as the infection spreads, and if the player does not provide themselves with temporary relief through the use of crafted brain stims, it will eventually result in their "undeath," leaving them to join the ranks of the very same rizn they were just shooting at. The following video shows the first draft for this sequence, and I'm more than happy enough with the results to keep it in place for the upcoming Alpha release and will likely save any further polish for the Beta.

In case the blood overlay that starts taking over the screen wasn't enough of an indication to the player that they're nearing death, I've also added heartbeat sound effects as another warning. Once the player's health drops below a certain point, the heartbeat will play at a volume that is at first barely audible but will increase in both frequency and volume as their health continues to decline. When they die, the sound of this heartbeat flatlining takes its place, a final reminder that you've perished and failed to survive the zombie apocalypse.

Scattered around Scourge City are various items that the player needs in order to survive, and among these are food and drink items. There are several stats that will need to be kept at healthy levels as players progress through the quarantine zones, and as I was play-testing I realized that there needed to be some indication that food and drink were getting low since they were by far the two most important. In keeping with the graphic novel theme, I opted for a simple speech bubble with an icon that shows which stat is currently in need of attention, and after some hunting in the Asset Store I was able to find an audio clip of a gurgling stomach which serves as yet another hint to the player that they need to find something to eat/drink as soon as possible. I'm still not 100% sure what the other stats will be - some of what is in place may be swapped out or removed entirely - but if I need to use the same speech bubble for them, I've scoped the new system appropriately to make that an easy process in the future. 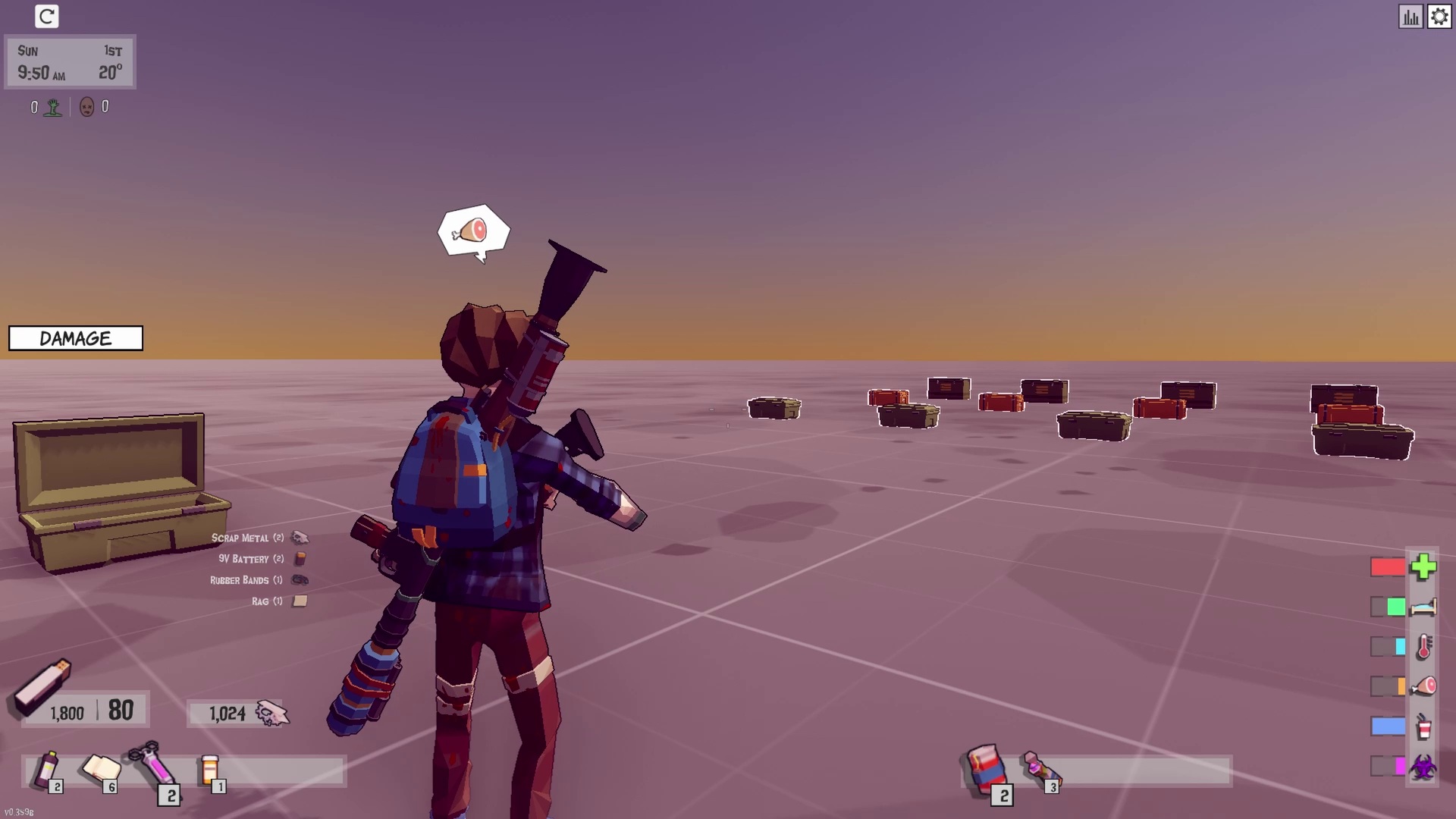 This one's been on my list for quite some time now but was never really a priority; now that I've reached this point in development, I felt it was time to put it in place since the fact that containers would just magically open beforehand was making play-throughs feel a bit flat. I have other animations available for when the player picks up individual items located in the city if I decide to go that route, and I plan to add a progress indicator similar to the one used when opening quarantine gates/doors when opening containers in the future. The first step was to make sure it worked and was well-suited for gameplay, and now that I've confirmed this, I will play around with a few ideas on how I can improve on what is already in place.

Aside from the new features listed above, most of the work I've done these last few weeks has been going through my list of known bugs and fixing as many as I can. This type of work can feel a bit tedious when you're in the middle of it, but the next play-through is always rewarding as you realize that all the work you've just done has made for a much more enjoyable experience. With the exception of these recent bug fixes, I am now spending more time play-testing this project than I am developing it, which has me confident in my decision to release the Alpha version this fall. There are still several bugs that need to be taken care of and plenty of room for more polish as well as some new features, but as far as providing a well-rounded (albeit unfinished) version of Survival Mode in the coming months for those who've pre-ordered the game, I feel like I'm right on schedule. After two and a half years of working on so many complex systems to ensure high zombie counts, my excitement is growing with every task knocked off my Trello board and with every git commit I make. It won't be long now, and if anyone is interested in pre-ordering RIZN, it is available at 25% off from now until the alpha release.